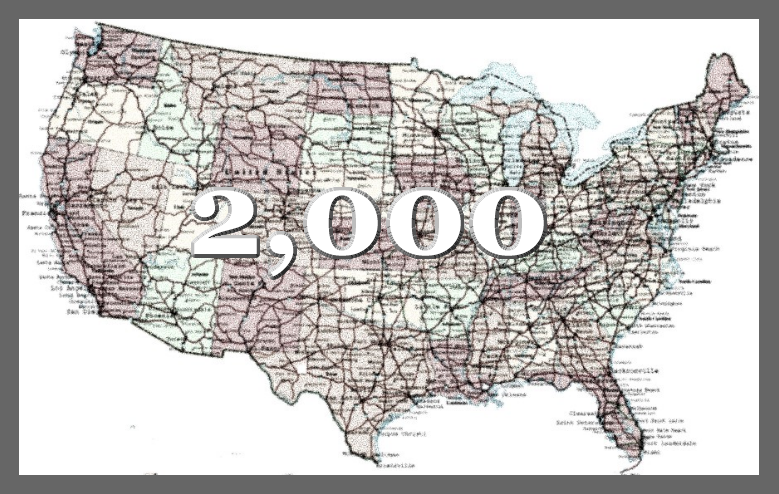 I have a plan for 2,000 dense urban places, with 20,000 people each connected to high-speed communication systems. Each is an urban core offering specific opportunities for unlimited growth in a limited area. If they do not alter their boundary until 2160, I will give each one of them $20 billion dollars today over and above existing federal fund commitments.

Imagine the nation re-designed in this way. Could it become 2,000 places with 2-10 million each, limited in land area, but not in growth, worldwide? All those left outside of the bonus core, say an average of 400 locations per state would become stewards of growth and all those outside protectors of the environment and wild place caretakers. These areas would have a few hundred people per square mile, a bonus in its own right includes ease of access to the specialized services of the bonus core. This solution will happen. It is the answer to every problem that would end the disordered, sloppy, and inefficient phases of urban development that plague the earth. The right question is how do we get there?

Infrastructure investment in the United States is approaching a classic line in the sand of public policy. On one side of the line, federal legislators support a policy called “catastrophic resolution.” especially if their eye is on eventually paying for a big-ticket investment that actually offered a big return. On the other side of the line, legislators stand for “whatever my constituents want and need,” leaving only a thing called the “debt ceiling” problem. The former see 100-year-old tunnels that, if they crumble, cripples the northeast economy for a decade. The latter will support rebuilding roads and highways, leading to failing big-box shopping malls.

In this form of federal leadership, infrastructure failures of any kind need a critical mass definition of crossing the line. How many horrifying (or just ordinary) deaths cross the line? What is the national dollar amount tallied up in general revenue losses due to a breakdown in transportation or unstoppable forest fires or floods? The thing is, no one knows, and no one will classify or designate a line condition. This is the pornography of public policy – they will know it when they see it.

A grant from the National Resource Defense Foundation (NRDC) brought a video to the public in 2014 that sums up one element of advocacy by Joe Minicozzi of Urban3 that guarantees $20 billion as a solid investment in America. Take a moment to watch it.

There you have it, a basic set of economic facts about why density works. Similar snippets support ideas about building a better federal leadership lever, others describe the power of diversity, and still, others offer new concepts of growth. These ideas are worth debate and analysis and tossed to the wind because the American landscape has a seriously undefined problem. It can regularly absorb substantial damage levels, and no one seems to have a line on how much damage might be too much.

The Centre for Research on the Epidemiology of Disasters (CRED) keeps the data for the world. Much of it is made available freely, but short of making some “end of days” speech, there is no line drawn that will change the trend in the general direction of trouble.  Below is a brief example of just four kinds of trouble.


Define and solve catastrophic resolution problems beginning with CRED data, and there may be a pathway for building a viable urban America that becomes resilient, and with some luck, sustainable.  There is one other table, and it looks at U.S. Federal Disaster Declarations in the same period below.  The trend is as real as it can get.  What needs to be added is a number in lives and dollars.

I am developing a list drawn from the general advocates of public well-being. It will include some of the specifics offered by environmentalists, revolutionaries, scientists, architects, urban planners, all kinds of real estate developers, community organizers, and political scientists.

Practically everyone lives in an urban area and practically all those who do not feel urbanized see their world threatened by urbanization.  Both share a vague notion of what cities must become, and that is the central issue because creating a clear vision for one means will save the other.

Facts for why 2,000 dense and well-contained urban centers will be needed will become very apparent, very soon.  These metrics can be trusted, and if that can be made to occur and recur, that will lead to a sense of shared control.  A language that will communicate based on these facts will find people from the feds on down and our roots on up.  If this communication occurs, the proof will be whether or not we as a nation will be persuaded to pony up the 20 billion of each urban core.

What is the language needed?

Subtle, conditional messages are not effective.