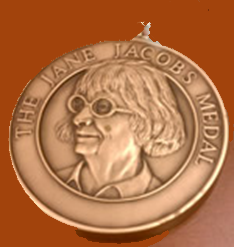 Following the 2016 American Presidential election, I turned to the writing of Jane Jacobs. I went straight for “Dark Days Ahead” on my library shelf and immediately came across this helpful passage in the first chapter.

“…the death or the stagnated moribundity of formerly unassailable and vigorous cultures is caused not by an assault from outside but by an assault from within, that is, by internal rot in the form of fatal cultural turnings not recognized as wrong turnings when they occur or soon enough afterward to be correctable. The time during which corrections can be made runs out because of cultural forgetfulness.’

Will we forget the assault on the dignity of women carried out by a candidate for the Presidency of the United States? As a candidate, he is a part of that unrecognized “rot” fully validated by the cultural turning of a national election?

Take hope that the election of POTUS45 is not a “fatal turning.”  The terms of office in the U.S. Constitution assure the observance of character sufficient to support renewal or to deny it.  Terms are kernels of political time, and like seeds, they carry the subtle stories of leadership. Some terms will champion the highest of human ideals and guide us with the opportunity for growth; others do not for the lack of crucial nutrients.  The “blue ripple” swelled into a wave in 2018 in the House with nearly 40 new seats as Democrats.  Only three or four of these newbies have a nose for the rot, but never doubt the power of a small group of people to create change.

The message of the seed is not to grieve, but to find ways to be free and to grow. I cannot think of a better time in history to build a broader foundation for the vote than the 100th year of the 19th Amendment. Now is the time and 2020 is the deadline.

This idea may have nothing, or everything to do with the design of the dense urban setting.  I think the “vote” in the city is an urban design and community development problem that has been ignored. Jacobs tried to tell us and we stopped listening.

The cities (for hundreds of reasons) are skeptical, but unafraid of change because they are highly skilled with it.  There is a lot to learn from the day-to-day reality of your city if it is dense and rapidly changing. Today, it may seem very difficult to get to the truth but I can tell you exactly where you will find it.

Walk to your street outside of your home, that is where you will find the truth.  It is as simple as this photo/model shoot I stumbled across.  It is right at your feet, straight in your face, just look up and you will be eye-to-eye with the truth.  I can walk for miles from my home, and that is how I know what is true and what is not by what I fill into and add to each thing I see, each person I come across. How far does your street reach?

Those willing to accept this idea should do so knowing we are in a period where the worried search for cultural nutrients and the fear of change is strong. History says we are tempted to choose the warrior’s promise; to take what we want at no cost. Turning away from this path by the 100th year of the 19th Amendment will move us toward diligence, resilience and the intelligent work of amassing social context as the alternative to material resources. To succeed in this task, one dark force in the world requires exposure.

The 2018 election is a hint of the change that is possible, it is not the change we need.