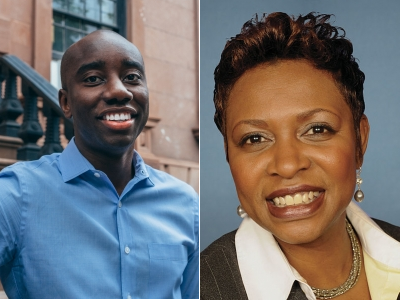 Is Clarke’s record of deep blue co-sponsorship for the Democratic Party leadership enough? That was my question. In 2018 Washington D.C., the Congress, Senate, and the Executive Branch are all Republican, and we of New York’s democratically blue urban world has been seriously challenged.  We need fighters that will force compromise.  Yes? After all, Ocasio-Cortez unseats Crowley in NY-14 shocker that same year. So, yes.

Safe means the best voters can hope for is a primary election that will make us smarter as residents. For the lack of reform in national campaign finance, the first thing to follow before any issue is the money. The Clarke money trail (here) for comparison to Bunkeddeko (here) is described below.

First, in 2018 Clarke had a spending trail at just under a half-million, while Bunkeddeko was just over $100,000. The money trail will be worth watching in 2020.  For the first campaign, Clarke’s fundraising was similar to that of Bunkeddiko’s, which means it could have been a good race on housing issues, but no debate. The 2020 strategy for wining is different — Clarke has bills all over the place promising the impossible and bird-dogging her opponent. For the 2020 Race and an election in April 2020, most of the money was raised in 2019, and the following is how it has been reported. For more detail, use the (here) links above to look for yourself. In round numbers, it goes as follows:

From April 2019 to the end of the year, Adem reported $244,000, of which $223,000 were individual contributions. Contrast that with Clarke. From January 2019 to the end of the year, $577,000 was raised, of which $438,000 were “committee contributions.” What are they? Corporations and PACs. Just hit the link above and have a look. The money comes from Wisconsin, Virginia, DC, Georgia, California — many are agents that want something from Congress but very little for the people of CD 9 or Brooklyn.

Regarding the 2018 election year, the average income of a Congressmember is $1million, but the salary is just $178,000? It became very clear that money is an issue but it isn’t money in the way the voters think of it, because we are in the world of retail-politics

Why is this Confrontation Essential?

The 9th is a working-class, truth to power district.
Most members of House of Representatives are millionaires. Not our candidates. A reps salary is $174,000. Clarke reports a net worth of only $105,000 in 2012, an update to 2020 will be exciting for comparison to Bunkeddeko. In the most recent fundraising quarter, Politico reported Adem raised roughly $121,000 — not far behind Clarke’s $164,000. It wasn’t enough. Nevertheless, with the same odds this year – Adem’s non-political, thankful approach and a track record of ordinary smarts, once again I like his chances.

The 9th is an “issue-condensing” district.
The 9th is the only NYC district that is only in Brooklyn. It is the least gerrymandered district in all of New York City, and its lines are drawn less for Red/Blue reasons than to assure voters can produce representatives in Congress that looks like NYC (Draft of Issues in slides). I plan to update these afterwords only because it’s what I do.

The 9th is a district of neighborhoods with mutual interest networks.
To some, CD 9 has the shape of Lady Liberty’s torch; to others, it might be more like a wine glass as it narrows from Crown Heights into Flatbush, Ditmas Park Sheepshead Bay (See map). Continuing to establish this network that moves our needs and interests to the forefront is what politics should be all about. Old school maybe, but better than empty promises.

The 9th is a vote-workable district.
An analysis of the 9th CD’s demography is easy to conduct. It can be analyzed into individual census tracts with election district connections to initiate listening during a canvass. A small network of walkers during the spring with clipboards, V-registration, and interview forms, and the PR Literature has two entire train station networks to work to get listeners. (Statistics pdf draft) Next, a look at the vote-rich districts and the challenges each represents. Half of the election districts and polling sites are covered with people at train stations (See Election Districts). You will find a picture of a Google map with polling sites and train stations for organizing purposes and instructions on how to participate.

The 9th can produce progressive reform narratives worthy of national attention.
The 2018 election was not only about Democrats beating Republicans, and it was about pushing Democrats to get our house in order.  Movements such as Indivisible on the national front have serious concerns regarding the future of the Democracy. (Issues) We are a beautifully diverse district, right down the middle of Brooklyn — from Crown Heights to Bensonhurst, we are the world. OK, so there are some toward the tail end with whom we might disagree. That is where we should be with something positive to say about how these voters feel.

The 9th is a district that can enjoy dialogue and a useful home-based narrative.
The 9th CD has the people and experience that know how to produce mutual benefits, share struggles, and enjoy victories with a deep breath of confidence. There are two reasons. First, this is a debate between Democrats and a few conservatives. It can only elevate the quality of the game. Second, pushing Brooklyn Democrats to get their democratic houses in order will be improved because of this challenge. (See New Kings Dems). A possible benefit might include help in city council races affecting portions of the 9th CD.