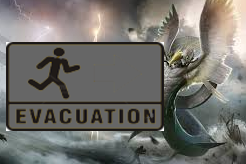 Most observers know from experience that the low cost of land and lower population densities occur from the center of their nearest large city outwards in a pattern of uses best described as the fragments of leapfrog development. They also knew they live in one of those fragments and protecting its value is important. The link below reveals an image depicting evacuation zones based on the threat of extreme weather in a dense urban setting, however, the fragments of safe locations remain unclear.

The urban world is clearly observable as uncontainable. The image above can stretch to every coast south. Like most things that grow and behave this way, they begin and end, grow and decay. Nothing shows how wasteful urban development is like big storms and fires.

Natural systems that react to storms and fires leave nothing behind that does not have a use in the renewal of the larger system of which it is a part. The detritus of urban decay is not an abnormality or malfunction without use or function; however, corporations such as Waste Management (WM) do not fill critical observers with confidence. The best, yet sad statistical example is in WM’s 2106 Sustainability Report that suggests a 36% waste recovery rate (see: Video below).

“Pollution is nothing but the resources we are not harvesting. We allow them to disperse because we’ve been ignorant of their value.”R. Buckminster Fuller

On the other hand, if the city is a container with a firm geography, bounded like a water bottle or one of WM’s containers, the city defines its users. Accordingly, it will develop to assimilate severe challenges, but not without a preset of physical parameters. Whether water, waste or something else, if not organized for use in a container of some kind, some remain unknown. Of necessity, the city must become renewable as a whole with reusable components.

One of the people working to get from the unknown to the known is Michael Storper, author of Keys to the City. He is an economic geographer contributing to our understanding of urban life. He separates “growth” from “economic development” using quality of life and standard of living measures such as real per capita income (nationally), distribution of revenue (locally), and social structures as they attach to income levels nationally and locally.

Storper’s data rich keys are from highly urbanized places in the United States and Great Britain. The information reveals combinations of urban structures that describe the impact of innovation, agglomeration or clustering that produce stable urban economies that also offer amenities (e.g., schools, tolerant neighbors, recreation, mobility) to produce choices. Some come with hard economic data for analysis about the softer measures of preference. An obvious top preference is affordable housing in urban areas. In NYC, inclusionary housing loans and square foot zoning bonus rules produce housing for low- and moderate-income households for occupation in the same building and market alongside high-income families.

Two families of three, one earning $63,000 and another $280,000 (2017) will have rent they can afford in the apartments of a multi-family building in a city and neighborhood where the skills of both households are interconnected (See ELLA and Inclusionary Zoning). Using a thirty percent of household income as a measure of affordability one rent would be around $1,500/month and the other would be $7,700/month. Arguments examining the drawbacks and benefits of this arrangement are ubiquitous in the urban sociological and economic literature. No matter, the depth of each argument, the designers of the containers defines the contents.

Innovations such as inclusionary zoning and similar programs push standard market forces toward choice with civility in a workable urban proximity. Stroper’s observations regarding this kind of urban development identify regional land use patterns as “territorially unequal” exhibiting two types of inequality. The first is that urbanization is itself a form of extreme unevenness: it packs people, firms, information, and wealth into small territories.” It also concentrates poverty, many types of physical deterioration, and social inequality.

Both empirical and statistical evidence of social fragmentation and economic displacement recurs with routine persistence. In the case where low- and moderate-income households live successfully “next door” to higher income households who help assure stable economic settings is a product of policy. The housing market is a “teacher”, but in the experience of a lightly contained city such as New York, it takes far too long to recognize and separate the right lessons from the wrong.

Stroper’s second type of unevenness in urban development is statistically observable over thirty to forty years. Individual metropolitan regions throughout the world undergo considerable turbulence in their fates, rising and falling in the income ranks, and gaining or loosing population at different rates. None of this is bad. Ever since the invention of capital, this behavior is the world’s most successful development process. Trial and error, up and down, back and forth, here or there is how the world works. Stopping the human part if it is stupid and besides, it is not doable. Turning the earth into a machine is well underway. The application of conservation of energy rules, on the other hand, says there is no way to isolate the energy of a machine system. While theoretically possible, conserving energy within a machine is not possible. In short, it stops.