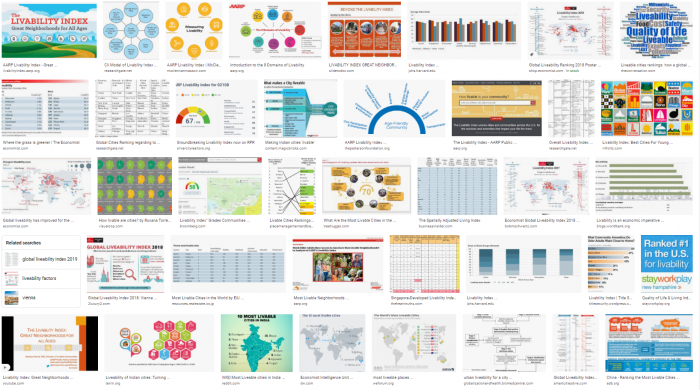 Personal growth is the main stimulant of culture and a balancing agent against the excesses of power. We slowly realize the stimulants are here and now when this growth is offered to all people freely. The next fight for freedom will be to sustain our ability to share what we know. The very first place to test for truth will be right outside your front door and where you can walk from there.

A broad new set of factors injected into the urban scale expresses a numerical value such as “top ten” as if a place has a price, and therefore comparable. These factors are used to index urban “livability” across the rapidly changing structure of cities. The index aid policymakers in rating the sensibilities of ordinary working people or retirees about those who seek to profit from their labor, skill, insight, capital, and productivity.

Two ranking styles are popular; the first puts a high value on economic and financial services supporting trade in material resources and economic measures. The second index lists environmental pleasures such as the climate, interesting scenes, cultural experiences, and the general absence of discord. This yields the appearance of objective criteria to implement a marketing response to a specific human need or general desire regardless of wealth or station.

The demand for policies that measure and react in short, precise cycles has begun. As a mathematical matter, the city’s economic value now includes specific environmental conditions such as costs associated with aesthetic perspectives. Voila! More parks, green streets, more room to walk. The mathematical value associated with vibrant or viable space is different than sustainable or resilient or secure and stable. Aesthetic measures associated with sociocultural conditions such as recreation and entertainment are used as a ranking. The mathematics of such ratings on all of these things center on the idea of weight, whether weighted equally or in a framework for preferences.

Undoubtedly, these value conditions continue to produce a dense urban form for people, yet it remains an abstraction of consumption weighted by per capita spending. The new flurry of numbers means one new thing, “they know” and “we know they know,” so now what? What is the impact? Measures of equity will become highly visible. It is now possible to index racism, even sexism, by place for scoring.

The driving factor for these new index factors will involve three-quarters of the earth’s population, who will have an urban life of some description by the year 2050. Most will be holding smartphones. The demand for an urban life has created this 3:1 ratio of “attraction,” leading to self-fulfilling urban development that continues without checking for the balance required. For example, the demand for a set of values that express diversity as one cherished over the concentration of wealth would be useful. Those who remain far outside the urban region may be recognized as those most important to sustaining that realm and keeping its ability to be wild as its stewards.