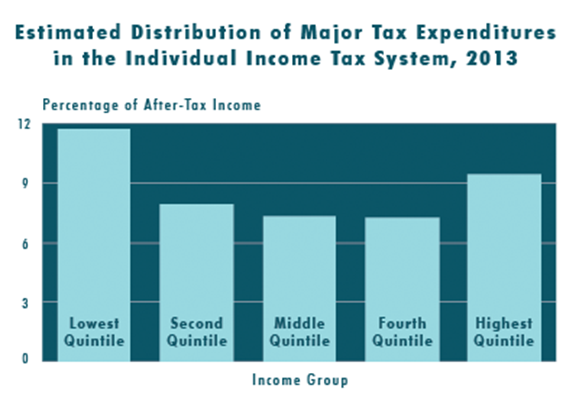 Tax is spending, and therefore the question of many organizations is rightly on the subject of what and then on who. A 2013 report by the Congressional Budget Office (here) illustrates a modestly progressive tax structure.

Nevertheless, income in the top 20% is highly skewed toward the very top of the distribution. Among households in the bottom half of the highest quintile (the 81st to 90th percentiles), average income was only $157,000; among the 1.2 million households in the top 1 percent of the distribution, however, it was $1.9 million. Much of this is due to exclusions, deductions, preferential rates, and credits in the federal tax system. Revenues are therefore much lower than they would be otherwise without a structure of tax rates riddled with individual and corporate “tax expenditures,” a term is used to include all redistributed revenues.

The earned income tax credit paid to low-income households is significant. However, the mortgage interest deduction (MID) even with the new $10,000 cap is an annual expenditure far greater than the annual budget of the Department of Housing and Urban Development (HUD). Similar tax expenditures include many forms of financial assistance for specific activities, entities, or groups of people (see amounts here).

When the phrase “squeeze the middle-class” is heard, the table below is what it looks like by quintile. The table summarizes the federal role in managing income distribution. Two significant transfers are involved, one is designed to prevent starvation and related forms of desperation in the lowest quintile with average incomes around $20,000 as a matter of humanitarian policy, the other is aimed at the higher quintiles in the hope that added revenue in the hands of the wealthy will sustain the middle 60% of households.

The Tax Cuts and Jobs Act (TCJA) passed 2017 shifted the benefits of tax expenditures to higher-income households in a variety of sophisticated ways that make it look like the ordinary household is getting a break, however, it is the percentages for the top income groups in the distribution that make it unfair if balance is used as a measure.

Advocates for tax laws designed to benefit ordinary households and attempts to reduce the impact of lobbyists working for corporations and the wealthy.

This outfit organizes about 100 state, national, and some international organizations in the design of fair taxes and combats corrupt financial practices.

The Tax Policy Center (TPC) is a joint venture of the Urban Institute and Brookings Institution. The Center is organized to provide independent analyses of current and longer-term tax issues. It communicates its analyses to the public and to policymakers in an accessible manner.

On the other side of the coin be sure to look at radical sites such as this one from the libertarian right.