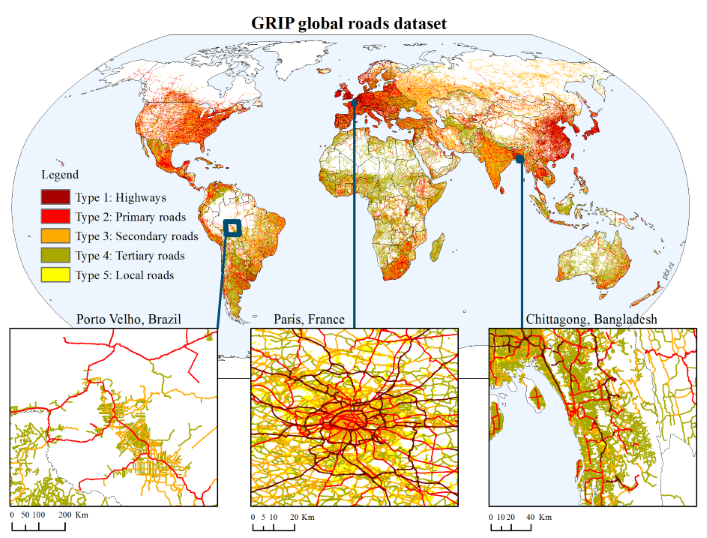 The Global Roads Inventory Project (GRIP) dataset describes 60 geospatial datasets on road infrastructure worldwide, covering 222 countries and over 21?million?km of roads. The dataset is split into 5 types: highways/ primary/ secondary/ tertiary/ local roads. It is used by organizations such as GloBio to monitor human impacts on biodiversity. The GRIP dataset consists of global and regional vector datasets in ESRI file geodatabase and shapefile format and global raster datasets of road density at a 5 arcminutes resolution (~8x8km).RLC

Data gathering such as this may appear to be a process like that of an embalmer, given the rate of change in biodiversity and the increase of global warming gases, largely facilitated by the expansion of roads and what the lead to for our use. But, could it be that simple? Would it be possible to end road construction?

The Global Roads Inventory Project (GRIP) dataset was developed to provide a more recent and consistent global roads dataset for global environmental and biodiversity assessment models such as GLOBIO. The GRIP dataset consists of global and regional vector datasets in ESRI file geodatabase and shapefile format and global raster datasets of road density at a 5 arcminutes resolution (~8x8km).

The United Kingdom has a national land-use policy like most of the EU. However, the UK is a dense island nation represented by a core of residential, institutional, and commercial urban centers in Scotland, England, Wales, and Northern Ireland. While the relationship with the Republic of Ireland is improving, it is deteriorating with the EU due to Brexit and complications with Northern Ireland.

The urgency of sustainable energy or a zero-waste world is well defined philosophically, but the question of successful implementation is unanswered.  On the other hand, the UK might be the first place of significant size where implementation will offer some hope.

In the United States and the EU, economic policy distributes energy resources to accomplish affordability while anticipating a period of increased scarcity extending through the twenty-first century.

The increase in “green deals” and the promotion of tech innovations focus on all levels of new urban development.  Alternative bio-energy/hybrid systems design materials based on re-use as the sustainable alternative addresses 10% to 20% of the problem. This is roughly equivalent to the rate of new products entering the market.  The remaining 80% to 90% is represented by the world that is already built.

The issue is neatly symbolized in the United States by the high-speed train.  Thousands of rail mass transit miles in older urban centers offer a century of trial and error development of enormous value to successful urbanization.  For example, the New York City transit service area is just 321 square miles serving its 8 plus million residents who, over the course of one year, will travel nearly 12 billion miles.

(See the National Transit Database for your region).

Older mass transit systems are examples of how government absorbs private economic development in the public interest.  Based on where and when the goalposts are set, “a penny saved” and “payback” investment in the existing dense core should encourage the holders of real estate to invest mightily to save millions. Still, the capital continues to move to greenfield opportunity (AKA – nice flat farmland) and in the American drylands (mid-to southwest areas), where substantial new development has occurred.

As of the beginning of the 21st century, nothing compels investors to “future-proof” past the wonders of a solid ROI.   Doing so will require new forms of public investment to move the dime on the zero-sum question by limiting development outside of the present urban core with various disincentives.

Similar limitations are outlined in the vital areas of the social economy.   The social security systems of European and American origin drew a safety line around everyone.   These health, education, welfare, and defense investments borrowed extensively on continuously advancing “productivity” technologies.  Is it reasonable to protect the high cost of long life and civil society, or is it more responsible for funding a permanent state of global warfare in various combat settings?

The only threat to analysts becomes increased social and economic dysfunctions contained within “regions.” The bet on technology, a reasoned quality of life contract, and a way to end the confrontational conditions caused by the poor allocation of energy resources require a serious look at the lines of demarcation.

The following list of “road datasets” suggests how important investors assess this large public function. Conduct a simple search test of the dataset titles [in brackets] below to confirm this impression. Report back via comments and published papers, musings and so on. Thanks